Scott of the Antarctic by David Crane

This is a grim and very sad story of great courage and sacrifice told movingly and sympathetically by David Crane. Recent historians have given Scott's reputation a beating and Crane restores it very well in this excellent book. He argues that all of the qualities that made Scott so beloved by Edwardians - honour, loyalty, patriotism, sacrifice - are the very characteristics which have made him reviled today.

After reading this book I wonder that anyone dared to criticise Captain Scott. As Sir Ranulf Fiennes wrote: "No previous Scott biographer has manhauled a heavy sledgeload through the great crevasse fields of the Beardmore Glacier, explored icefields never seen by a man or walked a thousand miles on poisoned feet. To write about hell, it helps if you have been there."

Scott coped with enormous difficulties - the deaths of some of his men, the loss of dogs and ponies, crevasses, manhauling heavy loads, terrible winds. The list goes on and on. In the end it was really only the unusually cold weather that defeated his team, according to Crane.

Scott's leadership has been criticised and he did have flaws. He could easily get irritable and he didn't like any lowering of standards, but his men (except for Shackleton) said that they'd follow him to the ends of the earth. As indeed they did.

The sentence that summed up the character of this complicated naval officer, who was unhappily beaten to the South Pole by Amundsen, for me was: "In his journal Bowers noted that Scott gave himself a longer trace on his harness when they were pulling through the worst of the crevassed areas, so that if anyone went down it would be him."

I defy anyone to read these without being moved to tears.

"Had we lived, I should have had a tale to tell of the hardihood, endurance and courage of my companions which would have stirred the heart of every Englishman. These rough notes and our dead bodies must tell the tale, but surely, surely, a great rich country like ours will see that those who are dependent on us are properly provided for."

A Great Task of Happiness

I can't find this and I hate losing things, especially books, so it's really upsetting me! I'll write a little bit about it from memory, but I like to have the book beside me when I review it. I'll write more when I find it.

This was the sort of book that I really like. Kathleen really had a more interesting life than her admirable husband! She lived life at a breakneck speed and Young, her grand-daughter writes in a breathless style which suits it.

A Bohemian young sculptor who 'gallivanted around Europe' and loved to sleep outside, Kathleen didn't meet Scott until she was 28 and he was over 40. Before this she studied art in Paris where she met Rodin and attracted flocks of men (as she seemed to all of her life), went to Macedonia to help war-victims and backpacked in Greece and Italy. She also met the famous dancer, Isadora Duncan, and stayed with her when she had her baby. Isadora was in love with a 'cad' and was still single. This was rather shocking in those days but Kathleen didn't care.

She became famous herself after she married Scott, gaining commissions from people such as Lloyd George and George Bernard Shaw. She associated with the aristocracy and artists.

Kathleen became rather an intimidating figure as she got older, apparently, although liked by many. Her daughter-in-law, the novelist, Elizabeth Jane Howard, married Kathleen's son, Peter, and found Kathleen difficut to cope with. Only 17 when they married, she felt that she couldn't live up to the success of this eminent family.

Kathleen's reputation has been blackened like her husband's. She's been accused of having an affair with the explorer, Nanssen, while Scott was suffering in the wilds of Antarctica; deserting Duncan when she took to drink; and various other things. Young restores her name in this book, correcting these misconceptions. This is very much worth reading if you are interested in the Edwardian age, the English aristocracy, or just a good biography. 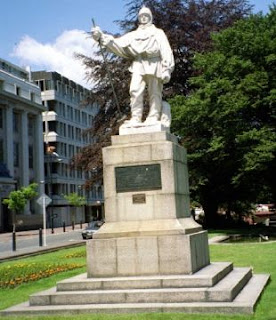 Scott of the Antarctic by David Crane

I first went to beautiful Christchurch, NZ, four years ago and saw Kathleen Scott's sculpture of Captain Scott near the cathedral. When I came back I looked her up on the internet and found out more about her. I meant to read this book then but I didn't do it until I came back from NZ last year! She deserves to be famous once again so I hope that this blog will make more people aware of her.

goooooood girl said…
This comment has been removed by a blog administrator.
5:35 AM

Xavier_Ninnis said…
Well done, a most interesting review.
What a sad thing it is that so many people's opinion of Scott, is based SOLEY on that, twisted, libelous semi-fictional hatchet-job of Huntford's.
1:18 PM

Viola said…
Thank you very much, greeseyparrot. I haven't actually read Huntford and I don't think that I will after reading Crane!

It's awful that a man who achieved so much and was truly great can be so criticised. One only has to read his last words to know how admirable Scott was.

I also think that it's a great pity that his wife's achievements are not better known. She was a very talented sculptor.
3:52 PM