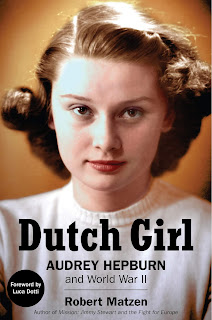 I am pleased to be joining the Blog Tour for Dutch Girl by Robert Matzen. I hope that you like my review.


Audrey Hepburn was terrified. The teenage girl was returning from delivering a message to an Allied airman when she saw German soldiers coming towards her. She knew that she would not only be asked for her identity, but also what she was doing. This required fast thinking. Audrey started picking wildflowers, smiled sweetly at the soldiers, and told them that she was taking the flowers home.

This is just one of the many tales Robert Matzen  tells in this exciting, but extremely harrowing book about Audrey Hepburn’s time in the war. Although the star was quite a heroine, the war affected her so badly that she didn’t want to talk about it so she kept it mostly secret except from her sons. Also, her aristocratic mother was once a fan of Fascism and even met Hitler, misguided by her Irish husband, Audrey’s dissolute father. Her mother saw the light quite quickly, however, once the Nazis invaded Holland.

Although Audrey did manage to establish a fledgling ballet career during the war, she had a terrible time. Her beloved uncle was taken hostage and shot. She saw her older brother dragged to a Nazi camp and Jews taken away on the cattle trains. She lived in Velp near Arnhem and towards the end of the war, people were suffering from malnutrition, including Audrey herself. The war raged around them and they turned to despair when the Battle of Arnhem was lost. Audrey once said: ‘Don’t discount anything you see or hear about the Nazis’. She said that: ‘It was worse than you could ever imagine. She was once helped by UNICEF and never forgot it – this led to her becoming an ambassador for the organisation.

This is a well-researched story which reads like a novel and might make people see the wonderful star in a different light. The only point that I would quibble at is that Matzen  seems to give the impression that all of the Mitford sisters were pro-Nazi. Nancy was very much for the Allied cause and Jessica became a Communist and ran away to America.

Tarissa said…
Your review really caught my attention here. This book about Audrey Hepburn sounds amazing. Seems like a person could learn a lot about her life from her. I've never read a biography at all about her, so.... I'm deeply intrigued with this title after reading your review! Adding it to my Goodreads shelf now. :)
4:57 PM