The Second Empress by Michelle Moran 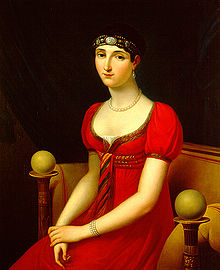 I enjoyed The Second Empress which tells the dramatic story of Napoleon's second wife, Marie Louise, in a colourful and vivid way.  Poor Marie had to cope not only with the tyrant, Napoleon.  She also had to put up with Napoleon's wild sisters, Pauline and Caroline.  They were both against the marriage and decided to dislike Marie from the start.  Caroline made Marie leave her dog behind in Austria.

Michelle Moran tells the tale of the Bonaparte's from several different points of view, including the promiscuous Pauline's and her black chamberlain, Paul Moreau.  This was confusing at first but she manages to define each character well and give their stories from a sympathetic angle.  I liked switching from one character to the other after I'd got used to this method of writing which is becoming increasingly popular.

Some of the scenes in the book seem pretty way out, such as Pauline fantasizing about marrying Napoleon, however Moran has an interesting Afterword in which she provides evidence that this was true.  I did find this aspect of the book rather sickly.

I highly recommend The Second Empress for anyone who likes historical novels.