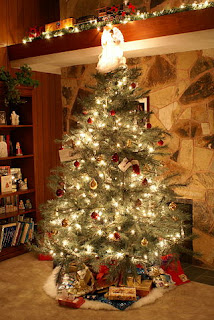 This beautiful book certainly enhanced my Christmas! I hope to buy it when I have more room.

The houses featured in the book range from Woodrow Wilson’s grand Regency house in Washington and a chateau-like Beaux Arts style home to the rather bare former Spanish Governor’s palace in California.  There is also the Whistler museum and a fairy tale castle, which was built with concrete, surprisingly.

My favourite story was the one about the Pitcairns, the wealthy couple who owned the Gilded Age Beaux Arts country house.  They celebrated Christmas by going to church in the morning and opening their tastefully decorated house to the community in the afternoon.  Children thought that all their dreams had come true when Mr Pitcairn presented them with bright and shining fifty cent coins.

Favoured Christmas decorations included massed pointsettias, big Christmas trees with electric lights, ropes of greenery with flowers and miniature villages. Traditional foods were roast turkey, mince pies and plum pudding, but they were apparently slightly different in earlier days. Benjamin Franklin would have eaten roasted boar’s head meat when he hosted dinner at Philadelphia Hall in 1775. He would have also enjoyed a card party.

I was also interested to learn that Thanksgiving was a more important holiday than Christmas until the mid-1800s.  This was the time for lavish meals and charitable present-giving.  Governors of New England states also proclaimed state holidays for Thanksgiving after 1815.

Be warned, however. There are so many pictures of dining tables with cakes that looking at this book might make you hungry!

I received this free ebook from Net Galley in exchange for an honest review.