Living the Good Life in New York. The Heirs by Susan Rieger

Eleanor has a calm and wealthy life in New York - she is happily married to a sophisticated and successful Cambridge-educated lawyer and they have five well-educated and urbane sons. When Rupert (Eleanor's husband) dies at the 'young' age of sixty-five, a woman shows up claiming to be his ex-mistress with two sons who are allegedly his children.  This plays havoc with family relationships and affects them all in different ways. Harry's accusing attitude towards his mother especially shocks his brothers.

This is mainly the story of Eleanor and Rupert's pasts and their marriage, as well as the tale of Sam, their gay son. Rieger contrasts Eleanor's privileged and stable background with Rupert's difficult rise from being a clever boy in a nasty English orphanage who even had a hard time in a cheap boarding house in New York working as a bartender. Rupert was helped by an Anglican minister. (I didn't think that this priest's practice of flagellation was realistic, even in those days. It was usually a Catholic practice). 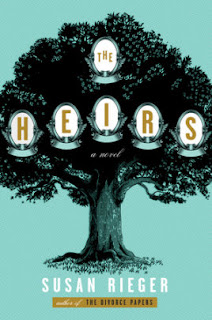 The book also covers Eleanor's ex-boyfriend Jim and his wife, Anne.  I didn't find this part of the book as interesting, and I also thought that the book perhaps involved too many characters. Eleanor and Rupert's story  was the most engaging although Rupert's past was pretty sordid and his time in New York - the boarding house and the precocious teenage girl - seemed rather cliched and old-fashioned, but also true to life.

This is a modern Edith Wharton-like story of relationships which gives the reader a lot of things to ponder about relevant issues. For example, San's friendship with Susanna, who is in love with him, is not unusual. How will this be solved? How will the brothers deal with the alleged ex-mistress of their father?

Some reviewers have criticised Susan Rieger's writing as being too 'wordy' but I liked her style of writing, and I liked reading about the Falkes's sophisticated and intellectual New York life and the twists and turns of their relationships. Reading about Rupert's childhood was depressing but his rags-to-riches story and how he achieved it was enjoyable.

I am going to read Susan Rieger's first novel now.

I received this free ebook from Crown Publishing through Blogging for Books in return for an honest review.
Labels: Edith Wharton susan rieger the heirs