Illuminating Women in the Medieval World by Christine Sciacca 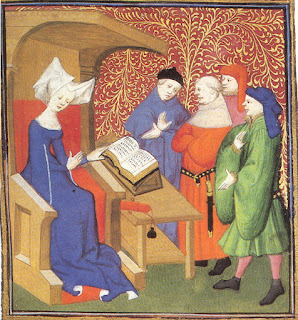 This is a beautiful book which is worth buying for the luminous images of the medieval manuscripts but it is also a fascinating look into the world of the women in this era.

Medieval women are usually thought of as being  idle and wealthy, damsels in distress, nuns or prostitutes. The truth is very different. Women played a big role in the economy. Merchant's wives sold their crafts at markets and participated in the trade of goods and poor man's wives worked in the fields. Aristocratic women often commissioned manuscripts, became patrons of art and the higher-ranking ones even played a part in negotiations. Saint Hedwig, for example, had seven children, assisted her husband, a former duke, with peace negotiations, and after she and her husband made vows of chastity, she sponsored religious houses and cared for the poor.  She is also supposed to have performed miracles so she became a saint.

Some women, such as Christine de Pisan, Helouise and Hildegarde of Bingen, also played important roles in the arts. Christine de Pisan and Helouise wrote while Hildegarde composed wonderful music, amongst other things. Other women illuminated manuscripts themselves or had their own images or words placed in works that they commissioned.

This book covers a wide range of topics, such as how women were viewed, the ideal women,'bad' women and marriage and courtly love. Each chapter contains manuscripts illustrating these subjects.  Although piety and obedience were regarded as virtues, I liked the fact that strong-willed and courageous Biblical women, such as Judith who slayed an Assyrian general in his sleep to save her people, were also greatly admired.

This is a must-read for anyone interested in medieval women.

I received this free book from Net Galley in return for an honest review.