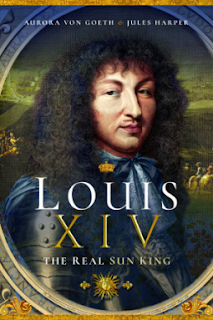 This book was a little dull at first, but it soon livened up with the account of Louis's fascinating love life, with the beautiful Mancini sisters and Louise de Valliere, who seemed to be having affairs one minute and guiltily rushing to church the next.  There are chapters devoted to every aspect of the great French king's life, including his patronage of the arts, his wars,  and the building of the magnificent Versailles Palace.  It is clearly and simply written but an interesting read.

While Louis XIV was undoubtedly a despot, he could be quite enlightened. There is evidence that he refused the offer to use a biological weapon, for example. Louis thought that 'the means of destroying life were sufficiently numerous', and paid the chemist who made the discovery to keep it to himself. The great king was also the first to introduce an award for 'exceptional officers' of the military which could also be granted to non-nobles.  He also founded a large home and hospital for aged and wounded soldiers, an idea which is also a good one for our times.

The French king still has a huge influence today, through music, comedy, dance and his splendid palace. He is an endlessly riveting object of study, and this book is an excellent addition to the collection.