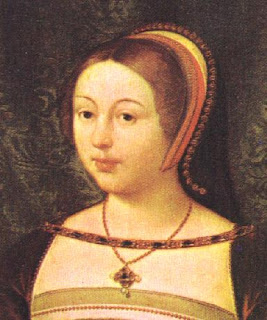 Melanie Clegg (otherwise known as Madame Guillotine) captured my attention when she dedicated her book to Margaret Tudor, because she was seemingly without any female friends.  This was a lovely thing to do.

Queen Margaret was certainly in need of friends! She had to cope with a warring husband and brother, the loss of several children, fierce Scottish nobles and thieving and adulterous husbands.  She also had to navigate her way through the Auld Alliance (with France) and the difficult relationship between Scotland and England. Like another famous Scottish queen, she was unfortunately a bit silly about men. She was relatively lucky with her first marriage, however. This was an arranged match to the handsome, intelligent and charismatic King James IV. He treated his much younger wife well, although it surprised and saddened Margaret that he wanted to keep his mistresses. As it wasn't unusual for royal husbands, she really couldn't do much about it.  The next two husbands were far worse!Trying to keep custody of the heir to the throne also proved a minefield.

This is a sympathetic and engaging biography of King Henry VIII's sister, who certainly led a tragic life. Margaret faced it courageously and her great inner strength enabled her to fight on through her terrible travails.  It's good that she had a little bit of peace before she died with her son and daughter-in-law and her grandchildren.

This is a must-read for anyone interested in the Tudors.