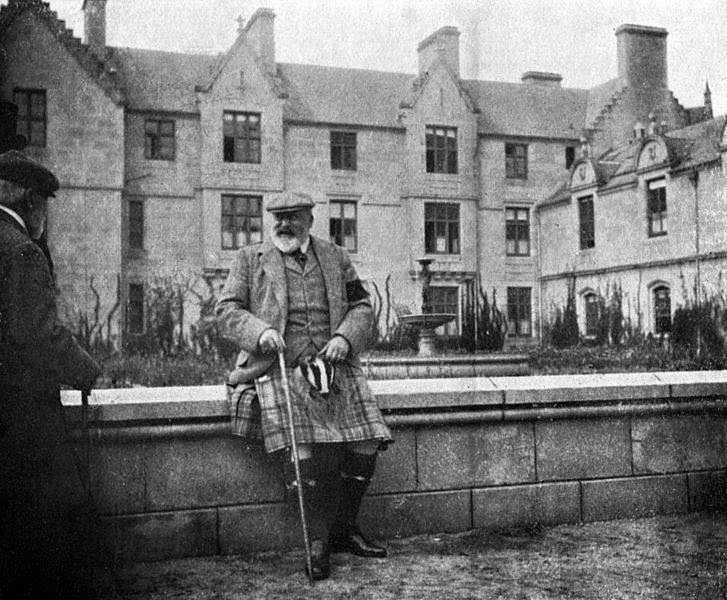 King Edward relaxing at Balmoral, photographed by Queen Alexandra
This is a light-hearted and enjoyable tale of King Edward VII's love for France and the good life that is full of interesting anecdotes. Stephen Clarke includes a lot of information about his mistresses*, and the book is somewhat prurient at times. (It's not suitable for children. Unfortunately, many of them probably don't want to read about Edward VII, anyway!) However, although 'Bertie' loved music-halls, theatre, opera and 'good-time girls', he also learned the skills of diplomacy and charm in France. Clarke praises the King highly, and gives him great credit for the U.K.'s alliance with France in two world wars.

Queen Victoria took the young future King to stay with Napoleon III and his wife, the beautiful Eugenie, and this opened up a whole new world of sophistication and culture to him.  They took pity on the young boy, who remained in love with France, which annoyed his German-leaning mother excessively.  When he became Prince of Wales, he also dismayed Gladstone by being friendly with Napoleon and Eugenie in England, and his wife Princess Alexandra was also anti-German.

According to The Times, 'Bertie' would not be a good King, but the venerated newspaper was proved wrong. King Edward worked hard, acted as a peacemaker and even managed to calm down his war-mongering nephew, the Kaiser. Soon after his accession, The French were angry with the British because of Fashoda and various other matters, but the King soon won them over by praising a French actress, and his diplomacy and great joi de vive. Speaking fluent French helped.

King Edward VII told a friend that he didn't have long to live, and then my nephew will make war. Unfortunately, he was right. Clarke argues convincingly that he helped to prevent war for a long time.


I will read more books by Stephen Clarke, but I preferred Jane Ridley's biography, because it was more serious.