John Marshall: The Chief Justice Who Saved The Nation by Harlow Giles Unger 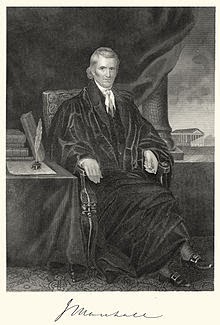 Engraving by Alonzo Chappel
This is a fascinating biography of the famous American lawyer John Marshall, who was a Revolutionary war hero and an impassioned supporter of Federation.  This admiring and sympathetic biography relates how Marshall managed to cope with a sick wife and the deaths of many infant children, and help to preserve the Constitution and play a leading role in the foundation of the US justice system, ensuring justice and liberty.

Harlow Giles Unger evokes the struggles, territorial disputes and riots that beleaguered the young nation in an exciting, rather breathless style.  He captures the revolutionary atmosphere of the times, and shows what the ambitious and clever Marshall had to contend with when he made the Supreme Court the great institution that it is today.

I was surprised by Unger's study of Thomas Jefferson, who apparently sipped soothing wine on the verandah of his mansion instead of joining Marshall in battle against the British.  He also favoured the French Revolution, arguing that liberty required some violence when most people were horrified by the massacres in France. Unger is scathing about Jefferson.  I've mostly read sympathetic accounts of Jefferson, so I got a shock.