Anna and the King of Siam by Margaret Landon 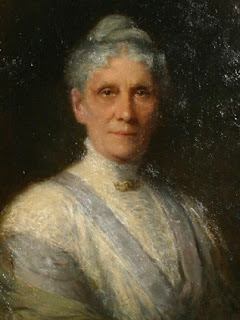 I have always wanted to read this book since I saw the wonderful movie The King and I when I was very young, and I wasn't disappointed! It's a wonderfully exotic and vivid story about a clash of cultures and the strange tyrannical world of the old East, and a brave young woman's struggle to 'own' her place in it.  It's the kind of book that one could read many times without being bored.

When Anna, a young widow, arrived in Siam with her ten-year old son, she was given an ignominious welcome and had to insist to herself that she wouldn't get straight back on the ship! After this, she was not given her own house for months and she had to cope with a lack of privacy and the stifling quarters of the palace. When her poor servant walked into the harem accidentally, she had to stop him being whipped.

The King kept her waiting, and she had little to do.  When she finally met him, she found him rather terrifying, although she very engagingly felt a strong urge to leapfrog down the lines of squatting figures  in front of him. Anna finds it hard to cope with the irascible and unpredictable king, the cruelty and slavery in the nineteenth-century Kingdom, and the ghastly tropical heat and humidity.
However, she is a very strong, independent and stable woman and she copes admirably.

This is a beautifully-written book that is highly-recommended.

I received this from Open Road Integrated Media via Net Galley in return for an honest review.
Labels: Anna and the King of Siam Anna Leonowens Margaret Landon Siam