Magnificent Missy. The Gatekeeper. Missy LeHand, FDR, and the Untold Story of the Partnership That Defined a Presidency by Kathryn Smith 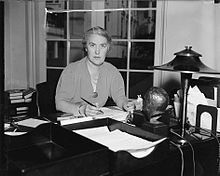 An admirer of Missy (Mar LeHand, President Roosevelt's private secretary, once said that 'she got the Oval Office working with the precision of a Swiss watch'.  This 'Queen' of the White House staff wielded much power and influence in the president's administration and she acted as the gatekeeper to the president and advised him on 'policy and appointments, speeches and actions'.  For example, Missy told a college student from Somerville who worked for FDR's election to call her at the White House if he ever came to Washington.  Thomas P. O'Neill did just that, and Missy took him to meet the president. The famous 'Tip' O'Neill always credited Missy with giving him his start.

Missy came from humble beginnings and suffered from rheumatic fever when she was 15 which weakened her heart, but she didn't let these problems stop her from having a prestigious career. Raymond Moley, a professor and a member of a group of advisers called the 'Brain Trust' wrote that: 'She had every virtue and every talent needed by the super-confidential secretary of a man in high office.' Although Missy often suffered from illness, she manged to work late into the night, and she was a huge help to Roosevelt's charitable activities, as well as being a glamorous hostess.  Sam Rosenman thought that she was a better hostess than Eleanor, Roosevelt's wife, because Eleanor could be argumentative and aggressive, whereas Missy could lead conversations and charm guests with her 'gracious manner'.

Roosevelt even seemed to get on much better with Missy than with Eleanor, enjoying gossiping and sharing jokes with him. It has often been suggested that Missy was Roosevelt's mistress, and she was seen sitting on his lap in a white nightgown by his son and their bedrooms were nearby.  However, Missy was a strong Catholic and the love of her life was William Bullitt, Ambassador to France.  Also, Eleanor liked her and they were good friends, so Eleanor either trusted her or she didn't care!

Missy at her desk, Wikipedia

The end of this biography is harrowing and Roosevelt let Missy down, considering all the work she did for him.  Missy led a short life but she seemed to enjoy every minute and she certainly led a 'life well-lived'.

I really enjoyed this fascinating and thoroughly-researched biography which vindicates Missy, whose role has been downgraded in films such as Hyde Park on Hudson which showed Missy as one of Roosevelt's mistress, and countless books, including some that I have read. There are extensive notes and a large bibliography.  I also found the account of why Kathryn Smith wrote the book very inspiring. I will be buying this one!

I received this ebook from Net Galley in return for an honest review.