Lord of the World by Robert Hugh Benson 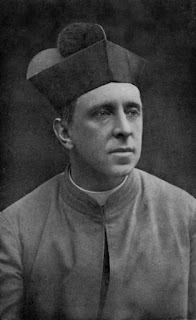 ‘'Ministers of euthanasia’ on the scene quickly after a volor (high-speed plane) crash and there are Euthanasia centers for the disabled and anguished. Catholicism is regarded as the enemy and many of the faithful have gone to Rome, the last holdout. The others keep a low profile. England eagerly awaits the coming of Julian Felsenburgh, the new President of Europe who hAs united East and West. There are no wars in this Communist secular ‘utopia’.welcome to the dystopia world imagined by Robert Hugh Benson.

Oliver Brand is an official in the secular, ‘humanitarian’ government and determined to get rid of ‘ superstition and ignorance’,’ and his beautiful wife Mabel is heavily influenced by his views. Although Oliver is supposed to be enlightened, he really has a condescending attitude to Mabel who, he thinks, is inclined to be emotional because she is a woman. Imagine their horror when they find out that Mabel’s mother wants to see a priest and return to her religion! This priest, Fr Percy Franklin, is a calm and strong leader, who doesn’t fear Felsenburgh.

In this new world, the government decides that people actually need ceremonies to replace the old ones and makes attendance compulsory. Now the Abbey is used for the veneration of Maternity,  Life, Sustenance and Paternity. These ceremonies remind one of some of the New Agey celebrations and, indeed, the new types of church services which are popular today.

Eventually, the battle between these two opposing views, will lead to a huge disaster…

This creepy, remarkably prescient novel by a Catholic convert with its similarities to today’s West with its desire to relegate Christianity
to the sidelines and its tendency to regard man as the enemy, but also worship mankind, had a big influence on the new Pope who has criticized ‘ideological colonisation’. This has created a big interest in the novel.

It is certainly a memorable book but rather wordy. I especially liked Benson’s explanation of Catholic belief.