The King and the Catholics. England, Ireland, and The Fight for Religious Freedom 1780-1829 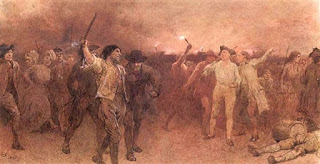 Lady Anne Erskine, a Scottish lady living in Clerkenwell, watched the flames rise nearby in horror from her window. She wrote that ‘the sky was like blood in the direction of the fires’.  She was looking at the Gordon Riots in 1780, the worst riots in London until that time. These riots were in reaction to the Catholic Relief Act of 1778 which introduced mild changes to discrimination against Catholics.

Those who fought bravely against the horrendous discrimination against Catholics in Great Britain had a tough fight on their hands. Before 1778, no Catholic could re eave political office, become an official, or receive a commission in the army or navy. Running a Catholic school or exercising the function of a Catholic priest were both punishable by life improvement. There were countless other laws against Catholics.  Until the nineteenth century MP’s had to swear the ‘sacrifice of the Mass and the invocation of the Blessed Virgin Mary and other saints, as now practised in the Church of Rome, are impious and idolatrous’. The King promised to maintain…’the Protestant reformed religion established by law’ to the ‘utmost of his power!’

Lady Antonia Fraser writes a fast-paced and thoroughly researched tale of Catholic emancipation which includes fascinating characters, such as the great Irish hero Daniel O’Connell, the urbane Cardinal Consalvi and the vehemently anti-Catholic Sir Robert Peel.  She describes the largely lacklustre Catholic aristocracy, who tended to take the easy way out, and the role of the ‘Irish Question’ which played a huge part in Catholic Emancipation. George IV, who secretly married a Catholic, but who was also strongly anti-Catholic, was the most important man of all in this story, and Antonia Fraser can even make the reader feel sympathetic with him at times.  When he was Prince Regent, he told Cardinal Consalvi to: ‘Hush, hush, Cardinal Tempter: when listening to you I seem to see Henry VIII and his daughter Elizabeth following me as avenging spirits’.

I have read most of the wonderful Lady Antonia Fraser’s books and this one is another must-read for history-lovers. It also has resonance today when religious freedom is again in question.

I received this free ebook from Edelweis in return for an honest review.