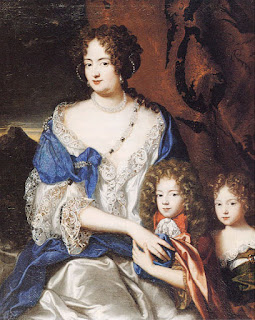 Poor Sophia Dorothea might have been the first Hanoverian Queen, but she became a prisoner instead because of a tragic love affair and the several evil forces against her. A heartbroken bride from the first, Sophia hated her husband Prince George - when she knew of her intended betrothal she threw his miniature across the wall and shouted, "I will not marry the pig snout!" The handsome soldier and adventurer Phillip von Königsmarck   was a very different matter. Sophia Dorothea would pay a terrible price for loving him...

Catherine Curzon brings intelligent and likeable but rather naive Sophia to life in this book, as well as such characters as the evil Clara von Platen. Sometimes, it is a little bit difficult to tell when she is writing actual history or speculation, for example, she theorises somewhat about what happened to von Königsmarck. Although this is a sad story, Curzon tells it in a lively, engaging and enjoyable way. Sometimes her language is very modern, but I didn't find it jarring.

I received this free ebook from NetGalley