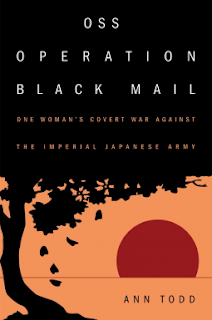 Elizabeth P. McIntosh was a leading figure in the realm of black propaganda, using various forms of media to destroy the enemy's morale and persuade him to surrender. This included compiling false newspapers, radio programmes,and changing letters and postcards. One of 'Donovan's Dreamers' of creatives and propagandists, she was the acting head of an operational branch in the East. She worked in India, China and Ceylon (now Sri Lanka).

Here Todd not only tells Elizabeth's story, but she informs us about the little-known, but hugely important role of OSS in the East, in a tale full of colourful characters, such as Paul Child (Julia's husband) and Jane Foster, who led a tragic life.  She also fills the book with the vivid atmosphere of the East, and she has a thorough knowledge of the history. I would like to read more books by her.

Tarissa said…
Hello! So... I just wanted to pop over and tell you that the Louisa May Alcott reading challenge for June has begun! Check it out if you're interested in joining us this month.

Viola said…
I will certainly join, Tarissa. Thank you very much.
2:50 AM