When Lions Roar: The Churchills and The Kennedys by Thomas Maier 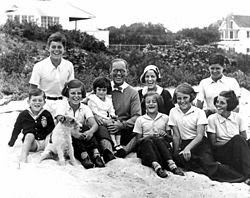 Thomas Maier relates the long and fascinating relationship between the Churchills and the Kennedys which began in the 1930s and continued almost until the present day in this lively and engaging book.  It also includes many other interesting characters, such as Pamela Harriman and Kay Halle. Many books about the Kennedys are quite dull, but this one never becomes boring.

These powerful families first met in the 1930s and shared strange dealings in alcohol companies.  Clementine, Winston's wife, thought that Rose Kennedy was one of the most refined and best-dressed women she'd met. Joe and Winston also formed a friendship, and Churchill's handsome and talented son Randolph stayed with the Kennedys in America. However, when Joe became ambassador to the Court of St. James, the friendship soon turned to acrimony and bitterness, because of Joe's defeatism and loud-mouthed opposition to the U.S. entering the war.

The families remained intertwined, and Thomas Maier covers the friendships between the younger generation, and Churchill's influence on Jack and Robert. Randolph got on well with Jack and Jackie, and he was even invited to write a biography of Jack. Kathleen Kennedy knew Pamela Harriman well. Kay Halle knew both families, and sometimes brought them together.

Maier provides an excellent account of Churchill's influence on Jack, who agreed with his decision to stand up to Hitler and read all of his books.  Kennedy's policies, wit and repartee were heavily influenced by Churchill, and his charm also reminded many of the great man.

This is a must-read for any Kennedy or Churchill fan. Remember too that Kennedy books are collectible, so it's a good idea to buy a copy!