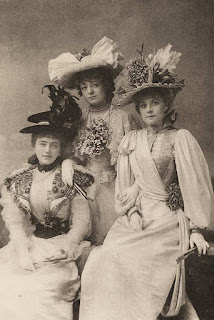 When Peter Kimpton first saw postcards of Edwardian ladies with their gorgeous big hats, he fell in love with them and decided to start collecting them.  He originally wanted to write this book to showcase his collection and it is certainly full of beautiful pictures of postcards of different women in glamorous hats. However, he soon discovered that there was a dark side to the manufacture of the hats.

This dark side involved the cruelty to and killing of thousands of birds for their plumes.  Some even went extinct.  Sometimes, the wings of the poor birds were ripped off while they were still alive.  Even exotic birds in remote places like New Guinea were killed for their colourful feathers.  Chanel began her career by making these hats and there is a picture by a Scottish artist in the book showing her surrounded by dead birds.

Another problem was the terrible conditions in the sweatshops where young women got the feathers ready for the hats.  Apparently, many of them got TB, bad skin or fever from all the dust and fluff.  No wonder there were several strikes in New York over pay and conditions!

Soon people started to worry about the cruelty to the birds and societies for their protection were formed. Laws were passed banning the sale of plumage from native birds and the importation of feathers in some places. President Theodore Roosevelt was so concerned about the situation that he passed an Executive Order making Hawaii into a bird reservation area.

This book isn't all depressing, however.  It has chapters about famous photographers, such as Samborne, the women who appeared on the postcards, and other interesting information about the times. For example, it has a short chapter on going to the seaside.

This is an excellent book for people interested in Edwardian fashion.