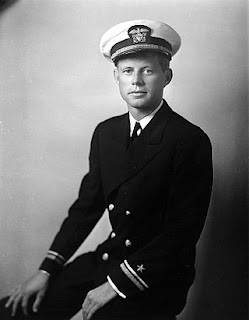 When the crew if the tiny torpedo boat, PT-109, saw the huge Japanese ship looming over them, they were terrified with good reason.  The crewmen of the other boats who witnessed the collision thought that no one could have survived and plans were made to hold a memorial service. However, Kennedy, the young 'skipper' of the boat had other plans. He saved most of his crew, a remarkable feat which even involved being shipwrecked on an island and big storms which hindered the rescue attempt. This had a terrible effect on his health, apparently.

I don't usually like war books, but I couldn't resist one about JFK by the great war correspondent, Tregaskis. This sets the scene of the battles in the South Pacific against the 'Tokyo Express' and the Japanese destroyers and Kennedy's background very clearly and Tregaskis vividly relates the dramatic and exciting story of the rescue and the detrimental effect on Kennedy's health of the wearisome battles in the South Pacific. I was a bit surprised that there was no mention of Kennedy having Addison's disease, but the author wouldn't have known about this when he wrote the book.

Richard Tregaskis led a fascinating life as a correspondent in the war so I am going to look for some of his other books.