The Birthday Boys by Beryl Bainbridge 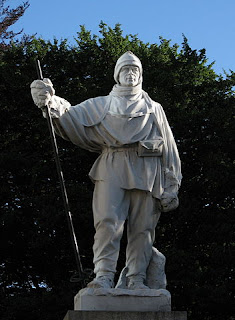 Beryl Bainbridge reimagines Captain Scott's expedition to Antarctica on the Terra Nova in this novel, through the eyes of most of the men.  Her ability to put herself into the minds of such different characters as Birdie and Captain Scott is brilliant, and her descriptions of Antarctica are irradiant. However, this is an extremely harrowing story and difficult to read. I also thought that she was quite hard on Captain Scott - she takes a dim view of his capricious character, his tendency towards depression and his blaming his mistakes onto others.  She also criticises the team's inexpertise on skis and Scott's mistrust of dogs.

I especially liked her descriptions of the wive's characters and the rivalry between them, especially the rather intimidating Kathleen Scott, whose fame as a sculptress has sadly been eclipsed by her husband's ill-fated journey.  Ever since I saw her sculpture of Captain Scott at Christchurch (and I was lucky enough to see that gorgeous city before the earthquake), I have been interested in reading more about her.

If you are interested in the expedition, this is an excellent novel about it.
Labels: Beryl Bainbridge The Birthday Boys