Caught in the Revolution by Helen Rappaport 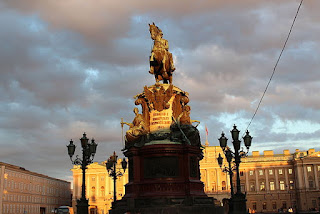 I read in Witnesses to the Revolution about a young student who complained that the 1917 revolution had begun with good intentions but unfortunately, it had been taken over by 'the dark people'. Rappaport's thoroughly researched and fascinating book provides evidence of this, but it mainly concerns the British and French in Russia who literally found themselves trapped in the revolution. She describes the British colony in Russia, the ambassadors and the journalists who watched as the country dramatically disintegrated.

It's quite a gruesome book - be warned.  It is a myth that the February revolution was comparatively peaceful with little violence. Although it came 'like a thief in the night', chaos soon descended and the world became one of 'dilapidation, of demoralization and decay'.  There were many reasons why Kerensky, who believed in orthodox socialism, ultimately lost control but in the end it was simply because the Bolsheviks were better organised with a 'definite political programme' and the government was not strong enough to put them down with force, as Sir George Buchanan, the British Ambassador had presciently warned.

My favourite characters in this book include Sit George Buchanan and his family. Sir George was a favourite of the Russians and he had even warned the Tsar that there would be trouble if he continued with his authoritarian government. Sir George stood like a rock amidst all the turmoil but he had to leave when Russia turned to anarchy after the Communists took over and he became one of the hated symbols of the hated capitalists.  Rappaport writes vividly that they escaped during the darkness of another power cut, sneaking downstairs by flickering candlelight past portraits of British royalty while their Russian maids sobbed.

This is a must-read for anyone interested in Russian history.

I received this free ebook from Net Galley in return for an honest review.
Labels: Caught in the Revolution Helen Rappaport Sir George Buchanan