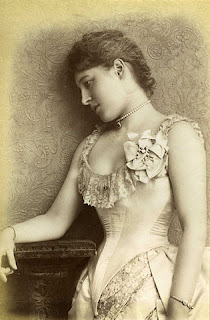 This book is full of gossip and scandal and great fun to read! There is much less about Edward VII than there is about his mistresses, however, and they were certainly a fascinating lot.  There was the dashing Jersey Lily who eventually became an actress and hated the 'dreary rehearsals' in a 'cold and darkened theatre and Jennie Churchill who was 'too shrewd to be explicit about their relationship'. (I read in her niece's book, however, that she sometimes wondered why the room was so dark and perfumed when she entered it after the Prince visited!) The list also included the famous actress Sarah Bernhardt who kept a cheetah, a wolfhound, and chamelons on her shoulder which changed colour to suit her gowns and Countess Daisy who became a socialist after a newspaper editor explained the uselessness of costume balls as a method of providing work for the 'masses'.   There were also Agnes Keyser, a rather moral nurse from a privileged background, and the ravishing Alice Keppel with her curvacous figure and 'superabundent vitality', the legacy of her Greek grandmother.

Catherine Arnold does get Bertie's character exactly right.  He could be very ruthless, for example, he ignored one poor former mistress who tried to blackmail him about a failed abortion, and he treated poor Harriet Mordaunt and Gordon Cummings abominably.  He was a womaniser and a gambler.  However, he was strongly against racism, and he was 'a man of sensitivity' who rejoiced in his friend's triumphs and wept at their sorrows. He was apparently 'hard to know and not love'.

I didn't notice anything especially new in this book and the sometimes blunt statements annoyed me. For example, Arnold writes that Jennie Churchill had 200 lovers - she is alleged to have had them.  However, it was very engaging and I could never read enough about Edward VII!

I received this free ebook from Net Galley in exchange for an honest review.

Hels said…
I am certain that Edward Prince of Wales really did see Sarah Bernhardt on stage on her opening night (1872) and wanted her immediately. They got together again a decade later, and I assume, a number of times after he became King Edward VII. I read Arnold's book and can quite understand why the Prince of Wales wanted the sexy actress. But I am not sure why she would want him.
6:55 AM

Viola said…
Thank you very much for your comment, Hels. I think that Sarah was impressed by princes and that she wanted the publicity? I must admit that I find children calling him 'Kingy' rather endearing, and he apparently could be very charming.