Strrength , Personality and Grace. The Woman I Wanted To Be by Diane von Furstenberg 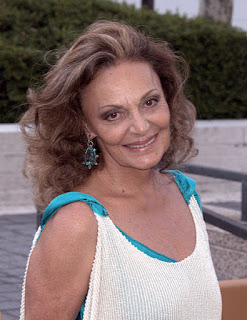 Diane von Furstenberg's definition of beauty is strength and personality. The beautiful designer certainly has plenty of both! This autobiography is filled with wisdom and grace which makes it a must-read, especially for budding dress designers and fans of her gorgeous dresses.

The designer owes much of her strength and resilience to her wonderfully courageous mother who suffered in a Auschwitz but never showed any bitterness and looked for the good in everything and everyone.  When Diane' s mother had a problem, she looked for a way around it and found a different path to a solution which was so satisfying that she forgot what the problem was in the first place! Her mother taught her not to blame anyone else for her problems and to turn negatives into positives.  She set a fine example, so that Diane could become the woman she wanted to be.

Although Diane married a prince and mixed with the jet set (she is quite a name dropper!), she has had a difficult life.  She had a surprisingly hard time even setting up her fashion business and the company faced huge losses at times. At one stage, she had four million dollars of dead inventory and in the 1980s she was horrified to find out that the company owed the bank ten million dollars! Not only this, but she had to fight cancer during one awful period of her life. It's a great book to read if you need a lesson in resilience

The designer also writes about the famous people she has known, her marriage to the prince and her boyfriends and children.  I thought that she wrote a few too many details about her boyfriends! The glamorous side of the fashion business sounds like fun but she certainly had to work amazingly hard, even though her marriage gave her a headstart.

I enjoyed this book, although I found it a bit long and technical at times. II really liked her intimacy with the reader which can  be quite endearing, for example, I loved this fact. When Diane lacks confidence in her life, she straightens her hair! When she is confident, she lets it be naturally frizzy! That is one in the eye for all the straighteners.


Labels: Diane von Furstenberg Fashion design The Woman I Wanted To Be