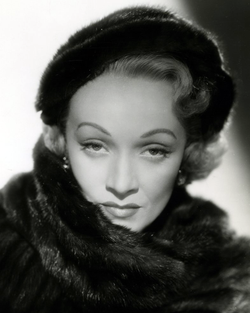 I am reasonably interested in  Marlene Dietrich but this biography written by her daughter was just too long and detailed, so I didn't finish it.

Also, it rather turned me off this star.  She was extremly possessive of her daughter and didn't want her to have lessons. Instead, Maria spent most of her time on set assisting her mother with costumes and advice.  Dietrich was also bad-tempered and inclined to put Maria down.  She gave her an enjoyable childhood in some ways, but I also got the impression that the oddness of Maria's experiences understandably embittered her for life. For example, Dietrich's husband's mistress lived with them in the same house much of the time and Dietrich would discuss her lovers with her husband! It's probably not strange for Hollywood but it would be hard to come to terms with such  a difficult upbringing

I received this free ebook from Net Galley in return for an honest review.
Labels: Maria Riva Marlene Dietrich