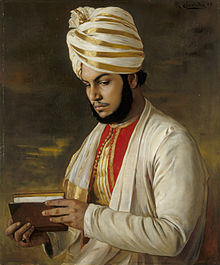 The Munshi by Rudolf Swoboda

Abdul Karim felt very excited when he first stepped on England's shores. Only 24, he had been chosen to be one  of Queen Victoria's Indian servants.  He soon introduced her to the colour and glamour of this 'Jewel in the Crown' by making her curries, teaching her Urdu and telling her stories about his homeland.  She quickly made him an unofficial 'secretary' and he helped her with her paperwork and even began meeting powerful people.  She lavished her Munshi and his family with attention giving them several houses in the UK and extensive lands in India. The Queen also conferred several medals and honours on handsome Abdul,took him on many trips to Europe with her Household, and had his portrait painted by famous artists. She even discussed Indian politics with him!

The Queen's family and staff were mostly horrified by all this attention being given to a lowly Indian clerk and feared that he would become another John Brown.  There were also worries that his good friend was sympathetic with the independence movement. The Queen attributed their dislike and jealousy of Abdul to racism and snobbery, and much of it undoubtedly was, but he did not do himself any favours. He could be rude to other staff, spared no expense (of taxpayer's money) and he stood on privilege.

This is a riveting and well-written story which I read very quickly, because I was keen to see what happened to Abdul. Shrabani Basu was lucky enough to obtain Abdul's diaries (a tale in itself0 so much of this book is based on new information.  I am looking forward to the film!

Hels said…
Abdul Karim was one of two Indians selected to become servants to the Queen in 1887, ages after Prince Albert died in 1861. If the queen quickly lavished honours, properties and responsibilities on her Indian servant, it probably was not just because he was good looking and a great cook. She must have been terribly lonely, with her husband dead and her children grown. Good for Abdul Karim!
4:57 AM