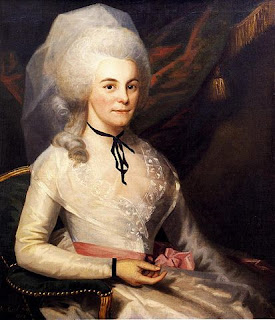 Although handsome and ambitious Alexander Hamilton was a ladies’ man, he wanted to marry a woman with character and wisdom as well as looks.  When he met charming Elizabeth Schuyler, he knew that he’d found her.  They were a perfect match.  She would be a courageous wife to the rising star of the developing nation through all the traumas of war, betrayals, scandal and illness. At one stage, she even showed great bravery when her parent’s home was under attack. ‘Betsy’ would also often have to look after the children while he spent long periods away.

Unfortunately, Hamilton’s brilliance caused jealousy and he also had a few flaws in his character which didn’t help his political career so  he unfortunately made several enemies. Elizabeth was also warned by her sister Angelica that Hamilton still had an eye for the ladies…She certainly had a lot to cope with but her life was never dull!

I had recently read a biography of the young Hamilton when I started this book so I expected much from it, and I am happy to write that I loved it. Susan Holloway Scott creates memorable characters in her portrayals of Elizabeth and Alexander. She does this great love story justice and the book is captivating until the end.  This is definitely a keeper, and I will definitely buy the paperback version!

I received this free ebook from Net Galley in return for an honest review.
Labels: Alexander Hamilton eliza Hamilton I Susan Holloway Scott