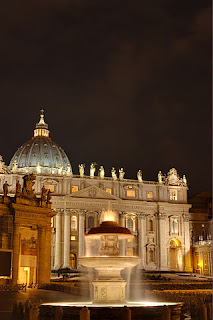 By User:MatthiasKabel (Own work) [GFDL (http://www.gnu.org/copyleft/fdl.html) or CC BY-SA 3.0 (https://creativecommons.org/licenses/by-sa/3.0)], via Wikimedia Commons

When Brandon Vogt decided to turn Catholic, some of his friends and family were astonished. He was greeted with 'crickets and confusion'.  Vogt thinks that this is because it is 'countercultural' and provocative because it is travelling in the opposite direction to our Western culture. He argues that these days when practically anything is allowed, it is really the only way to rebel.  It's not rebellious anymore to get drunk, have sex, pursue money or turn atheist. As Vogt writes: 'What's truly radical is to consider a Church that billions of people have embraced throughout history but millions of people ttoday dismiss as bigoted and outdated'. He quotes G.K. Chesterton saying that the Catholic Church 'is the only thing that frees a man from the degrading slavery of being a child of his age'.

Vogt points out, and people who are anti-Catholic should remember this, that 'no other group feeds more people, heals more people, teaches more people, or houses more people around the world'. Catholics have a duty to help others, and their considerable charity work shows that many of them are fulfilling their duty.  This is the part that I liked best about the book.

In this excellent introduction to Catholicism, Vogt studies the truth about Jesus and Catholicism in an academic but lively way so that this book is not at all dry.  He goes through the reasons for God's existence and Jesus's life point-by-point, and examines the writings of Jesus's followers who believed in his miracles and that he was raised from the dead.  Vogt makes a very considered study of the skeptic's arguments here which is extremely impressive.

He also doesn't shy away from the scandals of the Church and the difficult teachings on, for example,  abortion and homosexuality and women priests. Vogt considers whether the Church is anti-women and discusses why it only has male priests. However, this is not a long book so he doesn't go into the ins and outs of every ruling.

I liked the sections on the doctrines of the Church and the differences between Roman Catholicism and the Orthodox churches. However, I was surprised that Vogt didn't try the  Anglican Church and that he didn't mention it at all when he was explaining what distinguished the Roman Catholic church. Also, I don't think that he went into rules about Communion which affect an enormous number of people, and the arguments about watering them down.

This probably needs a few readings but it's recommended if you are interested in the Catholic church.