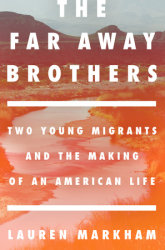 Why do so many child migrants go to the United States? What struggles do they have to go through? Was it likely that they’d be able to stay?
Lauren Markham set out to find the answers to these questions, and decided to use the example of thestory of the Flores brothers from El Salvador as an indication of their trials and tribulations.

The town that the inseparable twins came from used to be beautiful, but now it was ruined by violent gangs. Even the brothers’ evil uncle had joined one. Their parents were struggling with poverty, large debts and illness. Life was incredibly tough, but the Flores’ older brother Wilbur had escaped to the US. Now Raul and Ernesto were thinking of joining him.

This book describes their terrifying and harrowing journey to the US. They had to endure lack of food and water in the desert, and other frightening experiences. Even when they finally reached the US, it was difficult to get legal representation and they had to learn English. Life with Wilbur wasn’t easy, and they still had to face violent gangs. One of them even thought of going home. Markham, a writer and a teacher at the boy’s school, also writes about her own personal story and her efforts to help them.

Intersperses their story with the hardships that migrants face generally in the US and possible solutions. I was quite surprised that they found it hard to get a lawyer who would help them pro bono. This is hard to read, but interesting, although I must admit to skimming the end because it was such a grim tale.

I received this free ebook through Crown from Blogging for Books in return for an honest review.