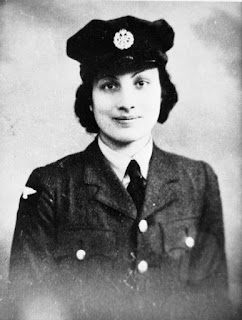 I love to read about the SOE and the French Resistance, and this is one of the most fascinating and detailed books that I've read about it.  Although extremely sympathetic to the courageous Indian princess Noor Inayat Khan, Magida also investigates why she was sent to France at all when she was arguably unsuitable for the role. He also tells how awful life under occupation really was for the French, and captures the atmosphere of the dark times in a well-written and thoroughly researched book.

Noor had an interesting upbringing, partly in Moscow, but mostly in Paris, where she was taught Sufi philosophy by her studious musician father. He taught her the importance of bravery and self-sacrifice, but he also emphasized the importance of honesty. This was not helpful when Noor joined the SOE, where she needed to be devious and dishonest and even pretend to be another woman entirely! Noor studied at university, and became a musician and a writer of poetry and fairytales, but when the war came, she wanted to play her part.  The problems were that she was innocent and careless and tended to make mistakes. Noor joined the biggest Resistance organisation Prosper but the Nazis soon managed to break this up, and it was a time when anyone you knew could be a traitor. But Noor knew that she was in danger, and stayed in France while sending her fellow agents and members of the British airforce back to Britain...

This is an inspiring story about Noor and her incredible courage, especially in these miserable times.

I received this free ebook from NetGalley in return for an honest review.
Labels: Code Name Madeleine A Sufi Spy in Nazi-Occupied Paris by Arthur J. Magida