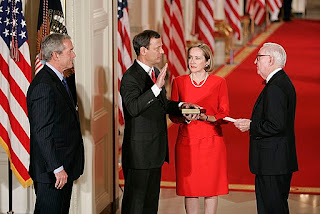 President George W. Bush described Chief Justice John Roberts (then a nominee for the Supreme Court) as being 'in spite of the sparkling resume...a gentle man with a gentle soul'.  Catholic and extremely intelligent, Chief Justice Roberts was brought up with strong, traditional values. This book is a liberal critique of many of his past decisions on race, immigration, electoral rights, business and abortion (mostly before he was nominated for the Supreme Court), as well as an interesting biography. His dissenting opinion from the Court's 2015 decision to uphold same-sex marriage is an example of his religious and conservative views. 'Just who do you think we are?' he said, protesting about the decision.

Yet he doesn't always make decisions which conform with his views, for example, he preserved Obamacare. Biskupic writes that his desire for  high public regard for the independence of the Court sometimes conflicts with his conservative opinions, as they should.

This is an interesting study of one of the most important and influential men in America.