The Secret Life of the Gold Coast by Brendan Shanahan 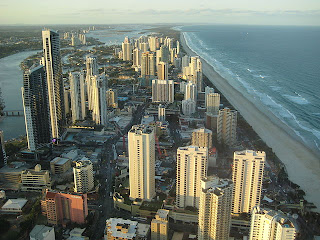 Anyone who reads this book will think that Queensland's Gold Coast is full of drug addicts, scam artists and crazy or stupid  people.  This is intended to be a journey into the coast's dark side, and Shanahan certainly succeeds in fulfilling this aim.  He stays with a single mother and a flamboyant young Norwegian in one of Surfers Paradise's well-known high-rise buildings, and constantly fears the rage of the mother's boyfriend.  He also endures the incredible noise and disruption of the ghastly annual car race, and he watches the antics of the Schoolies who go to the coast every year.  Several of the Schoolies do their best to trash the coast's reputation, but many also behave well.  Shanahan also goes to a weird swinger's party.

After reading about half of this book, I'd had enough.  I'm not mad about the coast either, but there are some lovely people there - even famous and ethical business people.  I also thought that it was a bit much to even criticise the beaches!  I: think that Shanahan is one of those travel who make money by describing the worst aspects of the places which they visit.  I will try his other books, however.