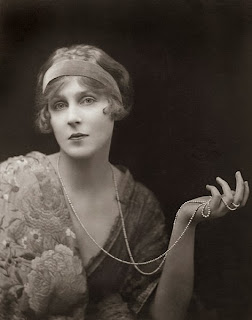 Beautiful, fascinating and aristocratic, Lady Diana Cooper shocked her family when she married a penniless doctor whose descendants came from 'the wrong side of the bed'.  However, the marriage was extremely happy and her husband, Duff Cooper, had a splendid career in politics, diplomacy and writing.

Lady Diana had many talents and writing was certainly one of them.  She even makes milking cows interesting!  I usually find reading books of letters boring, but Lady Diana's descriptions of being encircled by fires and watching plane flights during the Blitz and life at the British Embassy in France would keep anyone riveted.  She even managed to dazzle her young son with them.

I also enjoyed Lady Diana's accounts of her travels to exotic places, and how her husband warned about the immanent fall of Singapore.  Disappointingly, she didn't think much of Australia or New Zealand! She wondered 'if one could bear to live in Australia'.  One hopes that she would prefer it now.

There's also lots of 'name-dropping', of course. The book is full of  dinners and events with famous people, such as Churchill and De Gaulle (who she nicknames 'Wormwood').

I did get a little tired of the letters that Lady Diana wrote after the war.  Otherwise, I'd highly recommend this book.

Clive James's description of Lady Diana's writing can't be bettered: 'As a writer she had energy, verbal invention, natural comic timing and a fastidious ear which would have ruled out the possibility of her ever using, as Mr Ziegler does, such a cloddish term as ‘life-style’ — something he must have learned at Oxford, or perhaps at Eton'. (The Wrong Lady Diana)