The Eternal Party by Kristina Hagman and Elizabeth Kaye 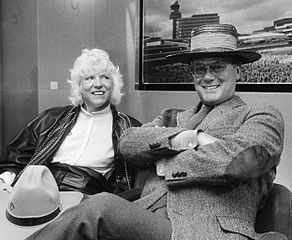 When Larry Hagman was on his deathbed, he asked his daughter Kristina to forgive him.  He didn’t say the reasons, so she decided to go on a journey back in time to find out.  This is her story…
Was it because of his several affairs?  After he died, former mistresses would tell Kristina how much Hagman meant to them which Kristina, unsurprisingly, found quite insensitive.  He had a long and very happy marriage, however. He even tried to care for his Swedish designer wife by himself when she got Alzheimer’s.

Was it because he was often drunk or on drugs, mostly marijuana?  People who grew up watching Hagman as the straight-laced Tony in ‘I Dream Of Jeannie’ will find this book, especially this part of it disillusioning.  Apparently, Hagman was really a somewhat left-wing hippie who searched for enlightenment, even taking LSD.

Was it because Kristina’s parents were loving, but quite negligent with her care?  Although Hagman’s family spent a lot of time outdoors (he loved hunting and fishing) and she liked that, she had an unstable childhood and she had bad experiences.  Her beloved grandmother Mary Martin took better care of her.  It surprised me that she was jealous of Kate Burton, the daughter of Sybil and Richard Burton, who seemed to have had a ‘meticulous’ upbringing.

This is an interesting and well-written autobiography, although rather sordid at times.  It certainly shows the power of resilience.

I received this free book from Net Galley in return   for an honest review.
Labels: Dallas I Dream Of Jeannie J.R. Kristina Hagman The Eternal Party