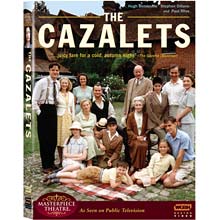 Young Louise lives in a privileged and entrancing world in her family's town house and its country house, where she is surrounded by a beautiful English garden with lavender and honeysuckle,  Although she is the heroine, this first book of the Cazalet series also introduces her large family.  She has two uncles, Rupert with his selfish younger wife Zoe and Hugh with his cultured wife Sibyl and cousins, such as Clary.  This Downton Abbeyesque life of the family only really exists on the surface, however - there are lots of family secrets.  For example, Rachel, Louisa's spinster aunt is really a lesbian and Edward, Louisa's father is a philanderer.  Even though it is 1937, Rupert Brooke would fit into this upper-class existence easily, but the winds of change are about to affect the lotus-eating existence of the Cazalets...

This is the kind of novel that you can actually live in.  The Cazelets are so real that they begin to feel like the wealthy family nearby. This beautifully written novel discussed issues such as homosexuality, contraception and incest.  I was going to write that it was ahead of its time, but it was published in 1990 so I am not sure about that! However, actually having a gay character in the book was probably unusual in 1990.

This is the third time that I have read this book and I never fail to enjoy it.  It made me want to watch the excellent TV series again as well.

I received this free ebook from Net Galley in exchange for an honest review.
Labels: Downton Abbey Elizabeth Jane Howard The Cazalets The Light Years