Finding Freedom in Fashion. Freedom Is Fashion by Tala Raassi 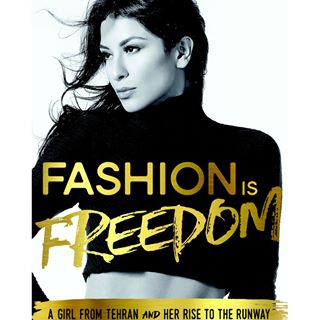 Tala Raassi had an idyllic childhood in Iran but it was always under the shadow of the oppressive government, Under the Republic, women had to wear the hibjab, alcohol was banned and clubs were shut down and there were several other restrictions.  The religious police stopped women on the street for wearing lipstick or showing a bit of their hair.  Tala chafed under this regime and she was horrified to discover herself in a nasty jail and sentenced to 40 lashes for wearing a mini-skirt! This horrific experience started her thinking about how women should have the right to wear what they like, and she started to dream of starting her own fashion business.

She was lucky enough to have an American passport and she eventually went back to America Starting her own business was extremely difficult, however, and she had lots of bad times along the way.  For example, she had a dreadful partner and even after finally attaining much success with a swimwear line, she found being part of the Miss Universe event traumatic. She was also subjected to a lot of disapproval from many fellow Muslims for promoting swimwear. She even received death threats.

Tala Raassi had a lot of drive, ambition and resilience, and she certainly needed all of it! This is an inspiring but rather harrowing story,  Raassi has plenty of helpful advice for would-be entrepreneurs, especially for those who want to start a fashion business. However, this is an interesting story for anyone to read, and I highly recommend it.

I received this free ebook from Net Galley in return for an honest review.
Labels: Fashion Fashion is Freedom Iran Islam Tala Raassi