The Church and the Roman Empire (AD 301–490) Constantine, Councils, and the Fall of Rome by Mike Aquilina 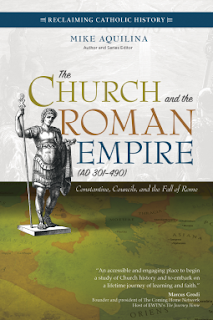 This is a simply-written but lively history which dispels many myths about the early Christians, and includes lots of interesting characters and saints, such as Saint Ambrose and Saint Augustine.  Aquilina explains the fight between true Christianity and heresies, such as Arianism, and gives a clear account of the several councils.  He tells the history as if it is a story, at times, making the different characters have conversations.

One myth concerns transubstantiation. According to Aquilina, the early Christians all believed in the Real Presence, and there were no arguments against it.  I found this especially interesting.

This book isn't like a textbook at all, and I will be keen to read the rest of the series, and more about some of the famous Christians mentioned in the book.

I received this free ebook from NetGalley in return for an honest review.
Labels: Mike Aquilina The Church and the Roman Empire