The Nuremberg Trials: Volume I Bringing the Leaders of Nazi Germany to Justice by Terry Burrows Arcturus Publishing 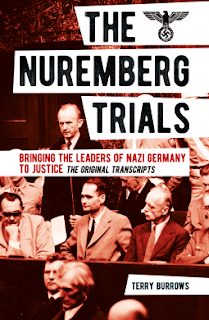 This is a clear and concise, but surprisingly eloquent account of the Nuremberg Trials. It is extremely difficult to read, however, because it is just so grim and horrific.  I couldn't even read some of it.  For example, children were actually thrown into the ovens at some of the concentration camps! The horrors are just never-ending.

I have read a lot about the war, but I didn't know that Russian PO W's were branded and deliberately malnourished, and that Tchaikovsky's and Tolstoy's houses were desecrated by the Nazis.

There was some criticism of these trials - that the laws were made by the victors, for example, and that the Axis powers were not signatories to all of the treaties and agreements in question.  However, as Robert Jackson pointed out in his closing speech, the defendants 'prepared and waged wars of aggression, rearming in defiance of the Treaty of Versailles, and launching unprovoked attacks...' They also 'enslaved and plundered the populations of occupied countries...'and persecuted and murdered Jews and Christians'.  I agree with the conclusion that criticism of the judgments in the face of the horrific crimes which the Nazis committed is really just quibbling.