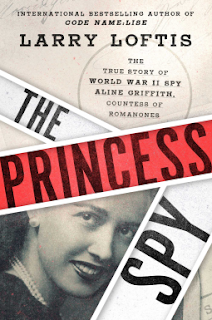 Born into a quiet hamlet in New York, Aline Griffith never dreamed that she would become a spy and a Countess. After her studies at university, the beautiful and clever young woman worked as a model for the designer Hattie Carnegie, but her brothers were fighting in the war, and she also wanted to play a role. Her facility for languages led her to a job in the OSS in Madrid, where she entered a world of espionage and glamour.  She found herself involved in Spanish high society and bull fights, spying on such people as princes and princesses to see how close they were to the Nazis. She wore clothes by Balenciaga and other famous designers to balls and country house weekends. She also stayed in luxurious hotels in Paris and other European cities. It was dangerous work but Aline certainly had a glittering life!

Eventually, Aline married the handsome and charming Don Luis, the Count of Quantinilla, but she continued her espionage work even after the war. She also made friends with movie-stars, the Duchess of Windsor and political leaders, and wrote several exciting books about her time as a spy, which she admitted were 'faction'. Larry Loftis delves into this to try to get to the truth about Aline, although considering that she was only a clerk, some of it is still difficult to believe! However, it's a very enjoyable story, and I think that I will try Aline's books to compare the two. I would also like to read about Edmundo, her colleague in the OSS, who  married a princess.

This is a great book for anyone interested in the OSS and the Second World War.

I received this ebook from NetGalley in return for an honest review.