Lady Catherine, The Earl, and the Real Downton Abbey by the Countess of Carnavon 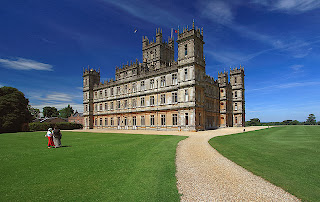 This is a captivating tale about the beautiful Lady Catherine, who seemed to 'float' up the stairs in her lovely silk lingerie when she hurried to see her children.  This book is also much easier to read than the one about Lady Catherine's mother-in-law Almina, because it is better-written.

Lady Catherine seemed to have a charmed life after she married the Earl - she became the chatelaine of Highclere after her husband's father suddenly died.  Even though the couple was forced to sell many possessions to pay heavy death duties, they had a wonderful social life and mixed with royalty.  (Prince George was a particular favourite).  They also kept lots of servants, so in some ways, this is like a story from the nineteenth century instead of the twentieth.

But Lady Catherine led a troubled life because the Earl was often away, and his philandering wore her down. She turned to alcohol and finally had a nervous collapse.  She managed to pick herself up, however, divorce the Earl and have a happier life.  This is probably the most interesting part of the book.

William Cross FSA Scot said…
For the sake of fair play and to give all readers all the possible choices available may I please mention that as with the previous coverage in 2011 regarding the life and times of Lady Almina ( the colourful Fifth Countess) in two books ( The Life and secrets of Almina Carnarvon” and Lady Carnarvon’s Nursing Homes “ both with distinct differences of fact , my latest book " Catherine and Tilly: Porchey Carnarvon's Two Duped Wives. The Tragic Tales of the Sixth Countesses of Carnarvon" will play out for what its worth or not alongside Highclere's latest romp on Catherine Wendell. My narrative draws on original papers, newspapers and the Wendell papers in Portsmouth Athenaeum, in Maine as well as the good will of members of the Wendell family. It will also be based on interviews and testimony from several people who knew and dearly loved Catherine. A sketch of Tilly Losch the great dancer, and bit part actress, a sort of combined Madonna and Lady Gaga of her time, is included too. Kind Regards, William Cross, FSA Scot.
9:48 AM