Not for Turning: The Life of Margaret Thatcher by Robin Harris 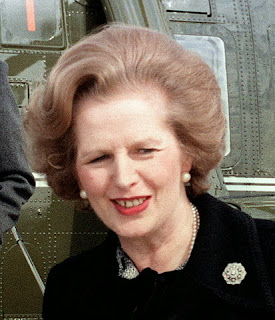 Mrs Thatcher described her Cabinet as 'rock solid - afterwards' when the Falklands War was over.  This book by her speechwriter and close adviser profiles her single-minded determination and her rise from a 'housewife/ accountant' to a world statesman.  It is a detailed look at her rise to power and her controversial leadership.

Harris's accounts of the special relationship with America and the Prime Minister's relationship with European leaders are especially interesting.  I also found the description of the Falklands War interesting - Thatcher dealt with this in a particularly authoritative manner, and she was widely praised at the time for restoring Britain's power and prestige by winning the war.  Amazingly, she had to cope with it largely on her own, because most of her Cabinet were against her.  Harris also provides lots of details about Mrs Thatcher's fight with the trade unions.

I was surprised that he hardly writes anything about Thatcher and Ireland.  Also, the book got rather dry at the end, so I didn't finish it.  It's best to read a little of it at a time.
Labels: Falklands War Mrs Thatcher Not for Turning Robin Harris