Lessons Learned as a Bridesmaid: What Every Single Woman Should Know Before Becoming a Bride

When I was young, there was a saying: 'Three times a bridesmaid, never a bride!'  Larissa Dayana Jean has been a bridesmaid 24 times however, and she is not taking any notice of this old saying.  In fact, she believes that her time as a bridesmaid will make her a much better bride, because it has taught her bitter and hard lessons about relationships, faith and how to be a confident, happy and good 'singleton'.  She writes about her journey toward equilibrium as a single in this book, full of excellent advice for young women.

Born in Haiti, Larissa went to America with her family when she was quite young, but her relatives never 'got' the modern American belief that it's OK to marry late.  If you are not married by 25 in Haitian culture, your relatives apparently think that there is something wrong with you!  Larissa's father told her that: 'The next wedding you walk into, it had better be your own!' She was under a lot of pressure to find a husband. 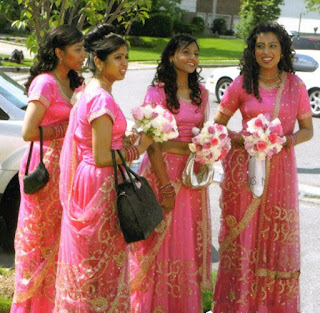 Larissa shares her experiences of having a broken heart, struggling with envy of her married friends, and why you shouldn't compare yourself with others.  She writes from a Christian point of view, emphasising the importance of purity before marriage and sexual morality.  Many people probably won't agree with this, but she puts her case well.

There was one piece of advice that I am not inclined to support all the time - at least in Australia.  Larissa argues that young women should wait for men to show that they're interested.  Many Australian and English men are shy, so I don't think that this applies so much here! American men are generally much more confident.

I do agree that men shouldn't initiate relationships via technology, however.  They should approach them personally! As she writes, a man who is serious about a job position wouldn't conduct an interview via text or telephone.

This is quite a charming book.  I enjoyed it even though I am married and fairly old!

I received this from Book Look Bloggers in exchange for an honest review.
Labels: advice on getting married Christian single getting married Larissa Dayana Jean Lessons learned as a bridesmaid