This is Your Captain Speaking: My Fantastic Voyage Through Hollywood, Faith & Life by Gavin McLeod and Mark Dagostino

Dinner with Bette Davis, working with Mary Taylor Moore, and meeting President Reagan.  Gavin McLeod includes these anecdotes and many others in his enjoyable tale about a small-town boy who 'made good'.  This is a great book to read for people interested in Hollywood tales and fans of "The Loveboat" and "The 'Mary Taylor Moore Show". McLeod even has some excellent career advice. 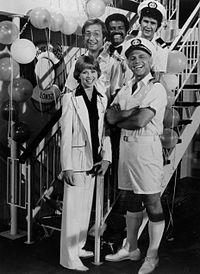 The book is not just about good times, however.  McLeod certainly endured his fair share of troubles, including alcoholism, divorce, and career failures. He suffered a tough childhood.  His father scared him when he was drunk even though he loved him very much, and his mother had to look after the children herself when his father died at just 39. Luckily, his sophisticated uncle introduced him to the world of theatre and McLeod won an acting scholarship.

Life was still difficult when McLeod was a young actor, however.  He was so poor that he could hardly afford a hot dog and he often ate 'ketchup soup' (ketchup with water).  He had no agent after acting for four years.

These are just some of the hard times that he describes.  Feelings of worthlessness drove him to drink, but luckily he 'kept the faith' in his heart, and  this enabled him to get back on the right track and improve his career. His 'lucky breaks' were definitely"The Love Boat" and "The Mary Taylor Moore Show".  His agent told him that "The Love Boat" script sucked, but he went with his intuition and did it anyway.

This is written in a colloquial style, which I found hard to get used to at first.  However, I really liked the story, especially the anecdotes about the "Love Boat," such as the way in which the actress who played Julie was found.

I received this from Booklook bloggers in return for a review. My opinion is entirely my own.