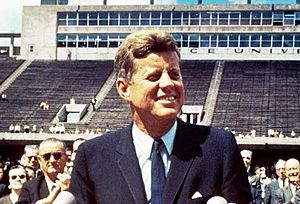 JFK mesmerised the American public with his good looks, intelligence, sophistication and urbanity. Many influential members of the press such as Ben Bradlee considered him their 'golden boy, and he appeared to be the working man's friend but impressed everyone with his wealth and privilege.  For a short time after his death, he was thought of as leading a new 'Camelot'.  However, his reputation soon received a beating because of his womanising and other scandals.

By contrast, LBJ was a nasty bully and crass.  However, he was also energetic, intelligent and had a desire to improve the lives of Americans.  Many of the media looked down on this rather vulgar 'Southern' President, and common knowledge that the Kennedy's hated him was not helpful.

Hodgson, a young British foreign correspondent in Washington had the opportunity t study both of their presidencies.  He argues that although they were the last two great American presidents, they've both been misjudged. Kennedy has been vastly over-rated, while LBJ has been under-rated.  LBJ achieved far more than Kennedy as far as civil rights and racial equality were concerned, according to Hodgson. LBJ's nemesis was the Vietnam war, and this has caused people to overlook his reforms.

This is a well-written and interesting book for anyone who likes American history. I was especially fascinated by Hodgson's view of the  American media.  I am a big fan of President Kennedy, however, so I will have to study this argument more.
Labels: Godfrey Hodgson LBJ and Kennedy Two last great presidents