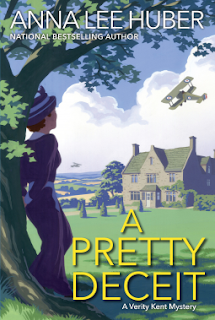 Intrepid Verity Kent and her husband Sydney are still suffering from the trauma of the First World War, and trying to recover. Verity doesn't like her aunt much, but feels obliged to help when she wants to sell her property in the country. She and Sydney start investigating the missing servants, ghosts from the former airplane field and the murder of the gardener. They are also dealing with the evil Lord Ardmore and his 'heavies'.

I was a bit confused, especially about Lord Ardmore, because this is the fourth book of the series, but Verity and her husband Sydney are attractive characters, and the historical setting is vividly described. I liked the writing style, so I will read the other three.