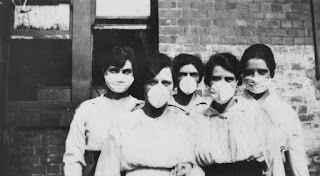 Spanish Flu killed about 12,000 Australians - less than one per cent compared with over six per cent of the global population, The Director General of the Commonwealth Quarantine Service Dr. John Cumpston read the reports from Europe in 1918 about an outbreak of a vicious new disease causing countless deaths, mostly about young people. He took speedy action, and the States agreed to thirteen resolutions to ensure that they acted consistently.

Unfortunately, in January, there was a new outbreak in Melbourne and Cumpston didn't push Victoria to declare it. Soon it spread to NSW and faith in the new Federal government broke down. The agreement was broken. Now the States decided to act alone but we 'still stayed the hand of the disease long enough to allow its virulence to weaken', and Cumpston was appointed the first director general of health in March 1921. Hopefully, we will handle this virus well, too.

This part of the book was probably the happiest story- it certainly gave me hope, although 12,000 people is not exactly minor. It's mostly a harrowing and miserable, but fascinating, tale about a deadly disease which ripped through the world's population, and had long and lasting effects. Some of the stories will even bring tears to your eyes.

The Spanish Flu even had great political effects. The terrible effect on the Germans may have caused them to lose the First World War, for example. Also, President Wilson's bout of Spanish Flu may have contributed to the Versailles Treaty, and his premature retirement from a stroke (probably cause by the flu) meant that he was unable to persuade the US to join the League of Nations or ratify the Treaty of Versailles.

This is a timely and comprehensively researched book which all politicians, and health directors, should read. Although harrowing, it is a compelling tale.

Hels said…
I think even if we had read the Jaime Breitnauer book before Covid, the lessons to be learned may not have stuck. Just as we tended to ignore AIDS and SARS etc because they were distant problems.

But now we can nod our heads wisely about the deadly disease that tore the world's population apart, and especially about the long and lasting effects.
4:40 PM