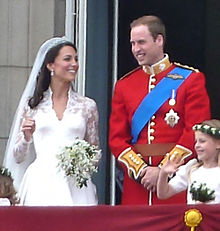 The Duke and Duchess of Cambridge on the balcony from Wikipedia).

This is an interesting analysis of Prince William's struggle to mature into a normal and grounded young man and to commit to the love of his life, the beautiful Kate.  Levin relates the stories of Prince Charles's and Princess Diana's troubled childhoods and distant relationships with their parents.  Princess Diana's upbringing was certainly worse than Prince Charles's - her parents were disappointed that she wasn't a son, and her father abused her mother.  Her own grandmother didn't help her mother when she obtained a divorce.  Princess Diana suffered from bulimia and had temper tantrums, probably because of her troubled upbringing.  Charles's nasty treatment of her didn't help, to put it mildly.

The fact that Prince William is so normal is largely because of his parents, however.  Princess Diana insisted on taking her new baby on tour to Australia, and she also made him see 'how the other half' live by visiting her charities with him.  Prince Charles also made sure that he had as happy a childhood as possible.  However, the fairytale marriage ended in disaster, and the publicity about his parents' respective affairs must have caused young William deep anguish.  Princess Diana also told him her troubles when he was much too young to cope with them.

Levin describes this history well, and her analysis of the Prince's struggle to commit is good.  Luckily, he found a sensible and warm young woman with a loving and stable family, and this was exactly what he needed.  The book also has lovely pictures of the popular royal couple.
Labels: angela levin diana's baby kate middleton prince william