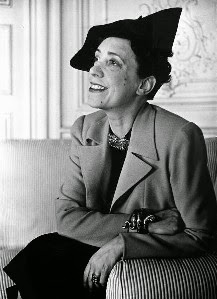 This sweeping biography of the great designer Elsa Schiaparelli by Meryle Secrest reads like a novel. Schiaparelli certainly led a fascinating life in exciting times, and she also collaborated with such famous artists as Salvador Dali and Jean Cocteau. She was also responsible for such modern and practical innovations as the wraparound dress, reversible coats and the all-purpose dress.

Although Schiaparelli grew up in an Italian palace, her early life was a struggle.  She married a con-artist who was also poor, and they had a very sick daughter. When she first lived in Paris, her flat was infiltrated with mice and rats.  However, better times came.  She became a designer accidentally, but she had 'the right look, the right style [and] the right feeling', so she soon impressed society.  Even royalty wore her clothes. Invitations to her parties were also prized - she was a charming hostess, a good cook and she had a facility for languages.

This well-researched book covers every aspect of Schiaparelli's life, including her Surrealism, her relationship with her daughter, her romantic relationships with two brothers (!) and her mysterious actions during the Second World War.  One of her favourite employees was married to an important Vichy politician, so the designer was regarded suspiciously.  She also travelled to America and South America a lot during the war, and this aroused distrust.

I did find that this book skipped from one subject to another fairly often, but I enjoyed it immensely.

(I received this from Edelweiss.  My opinion is entirely my own).
Labels: biography Schiaparelli fashion designer Meryle Secrest Schiaparelli Surrealism Vichy