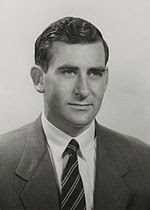 Billy Snedden
This is a rip-roaring tale about the mistresses of important Australians, including the lady loves of bushranger Captain Thunderbolt, Governor King, the leader of the Rum Rebellion, Jim Cairns and the rather handsome and suave Billy Snedden. Many mistresses of the officers of the convict era were abandoned with children, but Governor King actually treated his girlfriend well.  He told his wife about his illegitimate children, and his wife agreed to raise them with the mistress's consent.  She was obviously very understanding.

I especially enjoyed the story of the hell-raising Lilly.  Lilly arrived on Medan in Indonesia in 1958 looking for her lover who was working for an oil company.  Although Lilly was a beauty, she didn't behave like one - she was  hard-drinking and even a bit violent. She hit someone who annoyed her, leaving him with a cut lip.  She also kept irritating the Vice-Consul, lying down naked and drunk in the bedroom one night!  As he was a gentleman, he covered her up and attempted to help her when she woke up.

This is light entertainment, written in a slightly slangy manner that suits the subject.  It's great fun to read, and I liked the stories from Australia's early days.