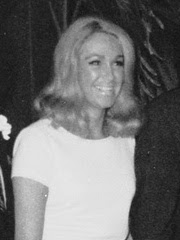 Once upon a time, five beautiful and strong women married charismatic Kennedy men.  They were called Rose, Ethel, Jackie, Joan and Vickie.  Rose, the matriarch of the dynasty, had a steely inner-strength and toughness that helped her through her husband's infidelities, the loss of his reputation in the UK and terrible tragedy.  She has often been thought of as fanatically religious and rather cruel to her daughter Kathleen, who fell in love with two Protestant men.  However, she is more likeable and softer in this account. Ethel, raucous and a tomboy, also clung to her faith through much tragedy.  She was a supportive wife to Bobby, managed to raise 11 children, and devoted much of her time to charity work, but she also loved a good time, and she was famous for her parties.  She also held educational seminars.  Jackie restored the White House to its former glory, charmed crowds everywhere she went with her elegance and facility for languages and became a symbol of the nation's strength and fortitude when her husband died. Kind-hearted, gorgeous Joan fell victim to her husband's philandering and found it more difficult to cope with suffering than the other wives.  She became an alcoholic but she bravely attempted to overcome it.  Vickie, clever and wise, was exactly the wife that the aged Ted needed in his last years.

This is a fascinating and sympathetic account of these wonderful women by Amber Hunt and David Batcher, and an excellent analysis of their characters.  I didn't find anything new in it, but I didn't know much about Joan or Vickie, so I was extremely interested in the last part of the book.

This is a great book for anyone who loves to read about this great American family.
Labels: Amber Hunt Kennedy family Kennedy Wives Kennedy women